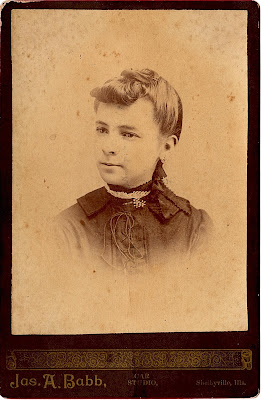 I have multiple cabinet cards of this young woman, Daisy Belle Rowell, showing her at different ages. 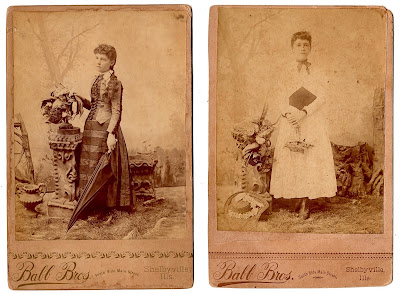 As I mentioned in my last post, Daisy was born in 1876 to Alma and Orange Rowell. Though she was born in Vermont, she moved with her mother to Illinois after her parents separated and spent most of her childhood there. While living in Shelbyville, Illinois, Daisy married Llewellyn "Liew" Smith, a carpenter. Daisy was 18 when she had her first son, Kimber, in 1894. She had her second son, Carl, in 1896. If you'll remember, I briefly mentioned Kimber and Carl in my post on Rev. Crews and his wife. Daisy and Liew went on to have two more children, daughters Mabel and Lois.


In June of 1898, Daisy, her two sons, and her mother, Alma, went back to Vermont to stay with family. They lived with Alma's step-mother, Julia A. Hastings, her widowed half-sister Rhoda Woodcock, and Rhoda's son Van for a year before moving permanently to Oklahoma.  Alma passed away in 1901.

As an adult, Carl Smith became a safe salesman and later worked in a cash register factory. His brother Kimber took a rather different route. He became a musician and toured the country in a C.A. Wortham show, a traveling carnival. In 1920, Kimber married Zylpha "Zip" Ardis Johnson, another musician, though I don't think the marriage lasted long. In 1930, Kimber is single and living with his parents. He also served in both WWI and WWII.

If you know who this family may be, let us know in the comments!
Posted by Emily E at 9:03 AM No comments: 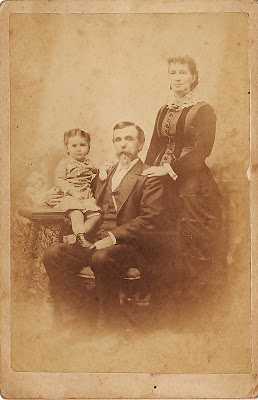 Researching this group of family photos has proven to be more challenging than I expected considering all the information written on the backs! Here is what I know so far:

Alma Almira Hastings was born in 1848 in Vermont to parents Daniel M. Hastings and Mary T. Munn. In  July of 1865, she married Orange N. Rowell, a farmer (This is the first time I've ever seen "orange" used as a first name! In 1870 they are living in Orange County, Vermont and he was born in Vermont, so perhaps he was named after the county?). Alma and Orange had their first child, Fred, in 1869 and their second, Daisy, in 1876. Not long after Daisy was born, Alma and Orange separated. I can't find a record of a formal divorce, but Alma moved with Daisy to New Trier, Illinois sometime between 1876 and 1880, leaving her husband and son in Vermont. In Illinois, Alma and Daisy (listed, for some reason, as "Anna") lived for some time with distant relations: Benjamin and Mary Munn, their daughter Persis and her husband Henry Moore, Persis and Henry's children, and Almira Munn. I imagine it was a crowded house!


I'm still unsure about who "William Howe" is and if he's even the man in this photo. It's more likely that the man is Orange Rowell, except that I don't believe he was ever in Shelbyville, Illinois, where the photo was taken.

I will continue Alma's story in next week's post, where I will focus a little more on Daisy.

If you know who this may be, let us know in the comments!
Posted by Emily E at 11:00 AM No comments: 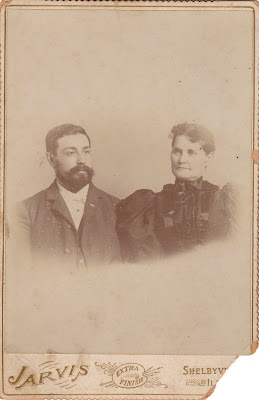 This is a cabinet card of Rev. Edward K. Crews and wife, Elizabeth. It was found with a group of family photos that will be the subject of my next few posts. Though they are not directly related to the rest of the family photos, it seems as if they were considered part of the family.

Edward was born in 1863 in Illinois and was the son of Irish immigrants Edmund and Catherine Crews. As a teenager, he worked as a sawmill hand. In 1883, at the age of 20, he married Elizabeth. Edward became a reverend as well as a teacher and taught well into the 1920's. Reverend Crews had no children of his own but certainly baptized many others. According to the inscription on the back, Crews baptized "Kimber and Carl", and "Kimber" was even named after him- I'm guessing that's what the "K" stands for! I'll talk more about Kimber and Carl in a later post.

If you know who this couple may be, let us know in the comments!
Posted by Emily E at 7:30 AM No comments: 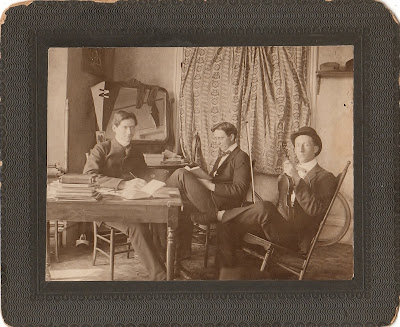 There aren't any names on this photograph, but there are a few fun details that offer insight into the everyday life of college students in the 1890s-1900s.
In many ways, it's not unlike a college dorm you might see today: Socks are draped over the mirror, books and notes are strewn about, and a photo of a friend is on display. Photograph trading was extremely popular amongst young students at the turn of the century. I've seen pictures of dorms in which entire walls were covered in photos! 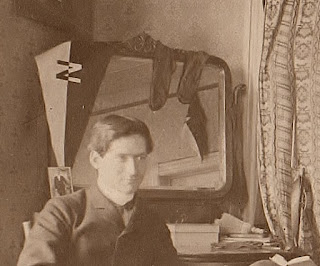 There are two pennant flags that appear in this photo: One draped over the mirror, and the other hanging above a door in the mirror's reflection. I hoped I would be able to find out what school it belonged to, but my research turned up nothing. Does anyone recognize it? 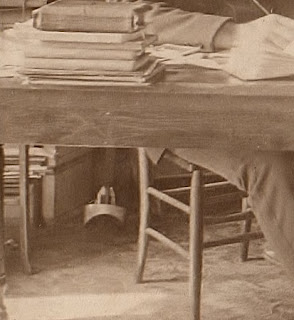 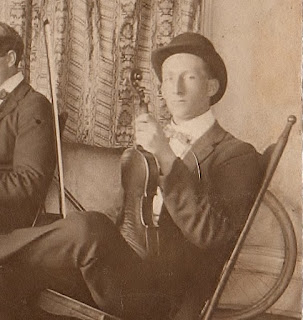 We can see a few of the things these young men might have done between classes. In the bottom left-hand corner, beneath the table, is a stereoscope, which would have allowed them to view double images in  "3D". Just behind the young man kicked back in his chair is a bicycle, and between the vanity and the window is what appears to be a gun with a bayonet. Music was also a popular form of entertainment that would have no doubt been provided by the man with the violin.
These young men were also conscious of their looks. In the top right-hand corner, we can see a shelf of various hats and on the vanity sits a clothing brush, which was necessary for keeping their suits neat and clean.

If you know who these students may be, let us know in the comments!
Posted by Emily E at 10:00 AM No comments: