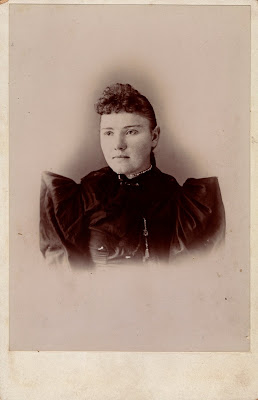 The back reads:
"Edith Balliet to

Edith Balliet was born in Pennsylvania in November 1877. Her parents, Peter and Katherine, moved with Edith and her older brother Willie to Kansas not long after she was born. In Pennsylvania, Edith's father had been a carpenter with a sawing mill in White Haven. In Bazine, Kansas, he became a farmer.

As a young woman, Edith considered becoming a teacher. In a June 1896 edition of the Ness County News, Edith is listed among those attending the Normal Institute in Ness City. I suspect this photo was taken during her time in school- maybe "Mamie" was a school friend? If Edith had plans of becoming a teacher, those plans quickly changed. She was married to Charles Frederick Harbeson, or "Fred," in 1897 at the age of 20. Fred was a farmer from Iowa who later became a carpenter, similar to Edith's father. The couple's first child, Bertha, was born in September 1898. Their only son Lawrence arrived in 1905, followed by Florence in 1914.

The Harbesons lived in Stafford County, Kansas. Here, Edith was close to family and enjoyed visiting her parents and in-laws. As well as raising her three children, Edith kept busy in other ways. During World War I, she volunteered her sewing skills to the Red Cross. She was also an active member of the Daughters of Rebekah, a branch of the Independent Order of Oddfellows.

Their oldest child, Bertha, was very social and enjoyed entertaining at the Harbeson house. In 1918 she was attending business college, and was married to Abraham Bowman in 1919 (I wonder if there is any relation to the Bowmans in my last post?). After serving in World War II, Lawrence moved to Austin, Texas with his wife, Helen, and their son Stanley. There he became a cabinet maker. Florence, who went by her middle name "Alma," married Dewey C. Boles in Oklahoma in 1932.

Edith and Fred remained in Stafford County for the rest of their lives. Fred passed away in 1951. Edith followed in 1954 at age 77.

If you know who this may be, let us know in the comments!
Posted by Emily E at 5:30 AM No comments: