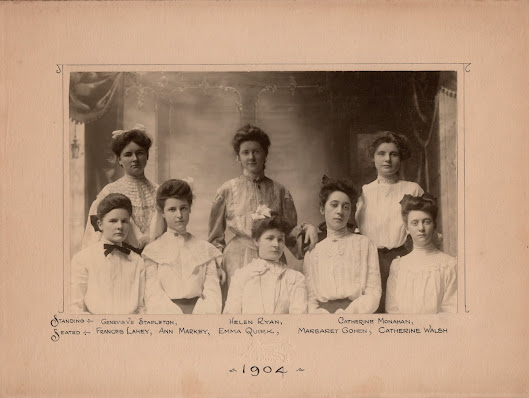 The 8 young women in this photo are the 1904 graduating class of St. Vincent's Academy, a Catholic girls' school in Detroit, Michigan. The academy building was constructed in 1897 as part of the St. Vincent de Paul church complex. Many of these girls are the daughters of Irish immigrants, while some made the journey from Ireland themselves. 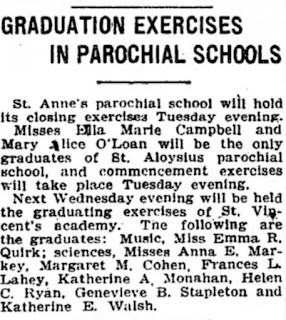 Genevieve Stapleton was born on December 22nd, 1884 in Borrisokane, Tipperary, Ireland. Genevieve, or Jenny as she was sometimes called, was the last of Patrick and Mary Stapleton's 10 children. She was just 6 years old when the family immigrated to the United States and settled in Detroit, Michigan. Sadly, her father Patrick passed away in November of that same year.  Genvieve attended St. Vincent's Academy and went on to become a teacher. She continued to teach in Detroit for the rest of her life and lived with her older sister, Anna. She passed away in 1955.

Helen Ryan, born in 1887, was the only child of Denis and Anna Ryan. Her father was a manufacturer of knitted goods. In 1910, Helen married Walter Quinlan at St. Vincent's church in a gown of white lace over silk and a tulle veil adorned with sprays of orange blossoms. The couple settled in Cleveland, Ohio, where they raised 5 daughters. She passed away in 1960 at age 73.
Catherine Monahan, born July 1886, was one of 7 children. Her parents, Patrick and Ellen, both emigrated from Ireland to the United States in their teens and early twenties. Patrick worked as a grocer to support his large family, including his sister-in-law, Mary Moran, who also lived with them. After graduating from St. Vincent's, Catherine became a teacher. In 1915 she married William J. Burns, with whom she had 8 children (a family just as big as the one she grew up in!). At the time of her death in 1983, Catherine had 27 grandchildren and 8 great-grandchildren.

Frances Lahey was born in Michigan around 1887 to parents John and Frances. John, like Catherine's father Patrick, worked as a grocer to support his 7 children. He was also the son of Irish immigrants. Like many of her peers, Frances worked as a teacher after graduating from school. In 1913, Frances became a nun and joined the Sisters, Servants of the Immaculate Heart of Mary. In 1920, she is teaching at a parochial school in Akron, Ohio, while living in a boarding house with several other teachers (who were likely other nuns teaching at the same school.) By 1930, Frances had returned to Michigan to live and teach at St. Mary's Catholic School in Mt. Clemens. At some point, Frances took the name Sister Florence Louise, which she went by for the remainder of her life. Sister Florence became the head of education at Marygrove College in 1938 and served as dean between 1938 and 1945. She passed away in 1967.

Ann Markey was born in Detroit on March 2nd, 1886 to parents James and Mary Markey. Ann, like nearly all of her classmates, came from a large family. She had 8 siblings- 2 older and 6 younger. Ann's youngest brother, Harold, eventually became the pastor of St. Vincent's. After graduating, Ann taught for a while before marrying Henry J. Brennan in 1913. The wedding was held at - where else?- St. Vincent's church, where Ann walked down the aisle in a gown of white charmeuse, lace, and pearls, with an ivory prayer book in hand. She became the mother of 7 children. Ann enjoyed entertaining and spent her summers at Port Huron, Michigan. She passed away after an illness of several months in 1948 at the age of 62.
Emma Quirk, born in Michigan in February 1880, was the youngest of James and Mary Quirk's 9 children. Emma's father was an Irish immigrant who worked as a laborer and sewer inspector. Unlike her peers, Emma mainly studied music at St. Vincent's. After graduation, she began teaching piano and harmony out of her home studio. I wasn't able to find any record of Emma beyond that point. Her father's 1916 obituary notes that he is survived by 3 daughters, all of whom are nuns in the Good Shepard Order, so it's very likely that Emma became a nun and possibly changed her name, making her difficult to find.

Margaret Cohen was born in Detroit on November 24, 1884, to parents Michael and Jennie Cohen. Michael, the son of Irish immigrants, worked as a factory foreman. Margaret had one older sister, Frances, who graduated from St. Vincent's in 1901. Both girls went on to become public school teachers and lived at home to care for their parents. Frances passed away in 1939, followed by Margaret in 1943.

Catherine Walsh was born in December 1888 to Irish parents James and Ellen Walsh. She was one of 5 daughters, as well as 3 other siblings who passed when they were young. After her father's sudden death in 1909, Catherine and her older sister, Bessie, worked to help support the family. Bessie found a job as a saleslady, while Catherine worked as a seamstress at a dress shop. In December 1910, Catherine married William Demeck, a machinist at an auto factory. The couple had 2 children, Norman and Mae. In 1932, Catherine filed for divorce from William, listing the reason as "non-support." In 1938 she married Ole Erickson, who she divorced the next year due to "cruelty." I lost track of Catherine after this point, so sadly, I'm not sure where her story ends.

If you know who any of these girls may be, let us know in the comments!
Posted by Emily E at 1:00 AM No comments: