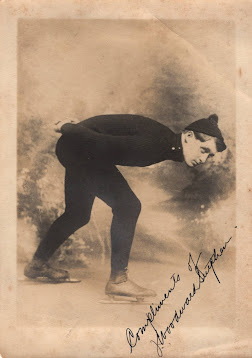 James Woodward Sutphen was born in Monmouth County, New Jersey in 1884 to John H. Sutphen, an architect, and his wife, Elizabeth. He had one younger sister, Gladys, who joined the family in 1890. As a young man, Woodward worked as a butcher before becoming a chauffeur for a private family.

Outside of work, Woodward's real passion was ice skating. He was an avid speed skater and a member of the Saratoga Skating Club of Brooklyn. A 1907 article in the Daily Record (the local paper of Long Branch, New Jersey) mentions that Woodward, like other local skaters, learned to race on Shrewsbury River. In February 1908, 24-year-old Woodward competed against 60 other skaters in the United States skating championship at Verona Lake. According to the Brooklyn Daily Eagle, nearly 6,000 people were present for the event. "The weather was chilly," the paper noted, "and the wind that swept down from the hills...was decidedly brisk." Despite the conditions, Woodward came first in both the one-mile and three-mile races and became the United States speedskating champion.
In 1915, Woodward married Miss Grace Reilly. Grace was working as a bookkeeper at Jacob Steinbach's Department Store when she met Woodward. According to a wedding announcement in the Daily Record, the wedding came as a surprise to many. After the wedding,  the couple promptly set off for a honeymoon in Canada. The article also notes Woodward's various medals from Montreal, Quebec, Pittsburg, Saranac Lake, Verona Lake, and St. Nicholas Rink.

Woodward served in the First World War and worked as an inspector for the Army Motor Transport Corps. In September 1919, a victory celebration was held in Long Branch, where he and 35 other men (and one woman) were presented with watch fobs and certificates by the mayor to thank them for their service. That same month, Woodward and Grace's son, Robert, was born. In 1920, the family is living in Manhattan with Grace's mother and siblings. It is possible that Woodward and Grace separated at some point in the years following, as they are living apart by 1925. In 1930, Woodward, now working as a mechanic, is living at home with his parents, sister, and son, Robert. It's unclear when the couple officially divorced, but in 1940, Woodward married Myrtle Gravatt.

Myrtle and Woodward remained together until his death in 1949 at the age of 65. His obituaries all made sure to note his brief but successful career as a speedskater.

If you know who this may be, let us know in the comments!
Posted by Emily E at 1:00 AM No comments: