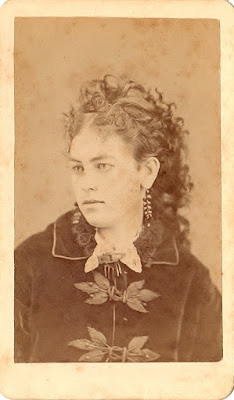 Henrietta Jeanette "Nettie" Follett was born in Licking County, Ohio in 1848 to dairy farmers Katharine Vansickle and Eliphalet Follett. She had 3 older brothers- Dwight, Lewis, and Howard- and 3 younger siblings- twins Fanny and Frank, and Will. Nettie was 13 when the Civil War began. All 3 of her older brothers enlisted with the Union army as soon as they could. Her oldest brother Dwight joined the 22nd Regiment, Ohio Infantry in September 1861, though tragically he died in a St. Louis Military Hospital in 1862. Lewis and Howard both survived the war.

The Follets believed in a good education for their children, not only for their sons but for their daughters as well. Nettie, along with Frank, Fanny, and Will, attended Oberlin College. Oberlin was the first co-educational college in the United States, admitting its first female students in 1837. Nettie attended Oberlin between 1865 and 1870 in the "Ladies' Department," where she would have earned an education equal to her brothers'. At Oberlin, Nettie met Carlos M. Stone, a law student. They were married in 1872.

The couple soon relocated to Cleveland, where Stone started a private law practice. He later became a common pleas court judge and in 1879 was elected prosecutor of Cuyahoga County. In 1899 he ran for the Republican nomination for Mayorality of Cleveland, though he lost to Bob McKisson. He is described in the History of Strongsville, Cuyahoga County, Ohio, as being an honorable man with a strong sense of character. Nettie is mentioned only briefly in the book, along with their two children, Ruth and Katherine.

Their first daughter, Ruth, was born in 1875. Their second, Katherine, was born in 1883. The Stones had a very comfortable life in Cleveland. In 1900 they were living in Euclid Heights, a fashionable, upper-class neighborhood (which is now listed on the National Register of Historic Places). When Carlos Stone died of pneumonia in 1908, he left everything to Nettie. Her daughters were still unmarried and living at home at the time, though Ruth had taken up a job as an editor for a magazine. In fact, Ruth would never marry and instead worked many different jobs, including as a secretary and the manager of an office building, until she retired. In 1920, 68-year-old Nettie was still living in Euclid Heights at 2820 Edgehill Road, along with Ruth, Katherine, Katherine's husband Frank Ray Walker (an important architect in Cleveland), their son Richard, Fannie Writner (Nettie's personal nurse), and John and Elizabeth Fehon (a Hungarian couple who served as the family's butler and maid).

It is likely Nettie died sometime in her 70's, as she does not appear in the 1930 census. Unfortunately, I could not find an exact year.