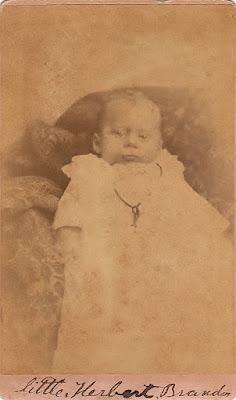 Herbert L. Brandon was born in 1882 to Herbert R. Brandon and Etta Ellison. Though born in New York, Herbert was raised in Ohio with his aunt and uncle, Charles and Anna McKinney. In 1912, Herbert married Gladys C. Dennis. The couple lived in Texas, then moved back to Ohio, where Herbert worked as a manager for the National Supply Co., which sold oil well supplies. He died in Bradford, Pennsylvania in 1938.

If you know who this may be, let us know in the comments!
Posted by Emily E at 9:43 AM No comments: 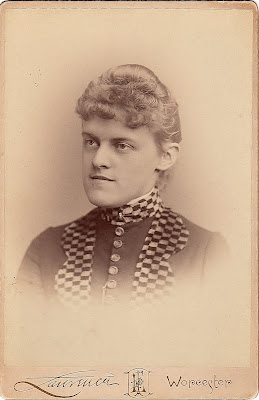 If you know who this may be, let us know in the comments!
Posted by Emily E at 11:30 AM No comments: 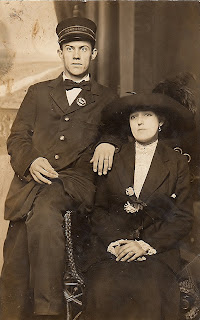 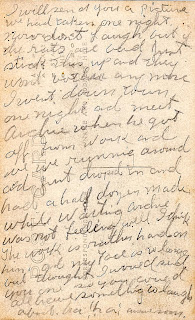 The back reads:
"I will send you a picture
we had taken one night.
Now don't laugh but if
the rats are bad just
stick this up and they
won't bother any more
I went down town
one night and met
Archie when he got
off from work and
?? we running around
and first dropped in and
had a half dozen made.
While waiting Archie
was not feeling well. I think
the work is rather hard on
him. God my face is so large
but thought I would send
you one so you
all have something to laugh
about. ha! ha! Write soon."

The AZO stamp box on the back of this photo dates it between 1904-1918, most likely the 1910's based on the clothing. The only name we have here is "Archie", presumably the man in the picture, who is posing with a woman who we can assume wrote the inscription on the back. We may not know the identities of these people, but we have a few interesting clues. Archie's pin reads "Los Angeles Railway 2398" and his cap reads "conductor". The Los Angeles Railway was a streetcar system that operated between 1901 and 1963.

If you know who this couple may be, let us know in the comments!
Posted by Emily E at 11:05 AM No comments: