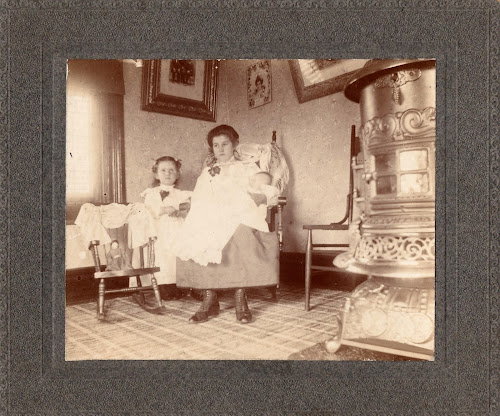 Writing on the back reads:
"Mrs. Henry Dearsman
Faye
Alice"

Before she was Mrs. Henry Dearsman, she was Ada Lucinda Garrett. Ada was born in Seneca County, Ohio, in 1877 to parents William and Elvira Garrett. She was the second oldest of the Garrett children, with one older sister, Viola, and four younger sisters, Estella, Mabel May, Nellie, and Hazel.
In 1895, 18-year-old Ada married Henry Dearsman, the son of German-born Adolph Dearsman, a respected farmer in Seneca County.

This photo was likely taken in the Dearsman home in Adams Township around 1901. At Ada's shoulder stands her eldest daughter, Faye, born November 22, 1898. In her arms, she holds Alice, born April 9th, 1901. Their third child, Homer, would not arrive until October 1905. Also living with the family at the time was Ada's younger sister, Nellie.

Henry supported his family as a farmer until April 1924, when he died at the age of 61. A few months later, 24-year-old Faye married Clarence Kreh, a farmer. Clarence and Faye had been together only 8 months when Faye fell ill with pneumonia brought on by measles. She died on March 13th, 1925, at age 26. I can't imagine what a terrible blow this must have been to Ada, especially so soon after the death of her husband. Just days later, 23-year-old Alice married Harold Diehl Meyer in nearby Tiffin, Ohio. Ada's youngest, Homer, married Delphine Le Jeune in 1928.

That same year, Ada herself decided to marry again. At 51 she married 60-year-old Elmer E. Howey. In the 1930 census, Elmer is working as a carpenter while Ada is working as a chambermaid in a sanitarium. She later worked as a cook at a hospital. Elmer eventually fell into ill-health and was forced to retire. He died of a heart attack in 1942. Ada lived to be 89-years-old, passing away in Green Springs, Ohio in 1966 after an extended illness. Her obituary noted that she was a member of the Green Springs Evangelical United Brethren Church, the Grange, and her local Garden Club. At the time of her death, Ada had two surviving children, eight grandchildren, 19 great-grandchildren, and one great-great-grandchild, as well as five step-children and 14 step-grandchildren.

If you know who this family may be, let us know in the comments!
Posted by Emily E at 2:00 AM No comments: 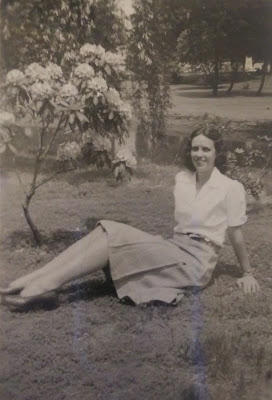 Recently, I was contacted on Instagram by Gina, who found photos of a woman named Helen Sanner in her grandmother's photo album and wanted to know more about her. I'm sharing the photos here, along with Helen's story, in the hopes that we can reunite the photos with her family!

Orpha Helen Sanner was born in Virginia in 1917 to Harry G. Sanner, a retail merchant and farmer, and his wife, Ruth. Ruth passed away in 1927 when Helen was 9. Her father remarried the next year to Clara Budd, a teacher. The family moved to Woodbury, New Jersey, where Helen’s half-brother, Ralph, was born in 1931. In 1940 Helen was 22 and working as a stenographer. Four years later, she married George W. Myers, a toolmaker for the RCA. The couple had two children, George Jr. and Ruth.
Helen passed away in 1999 at the age of 82.
If you know who this may be, let us know in the comments!
Posted by Emily E at 1:00 AM No comments: