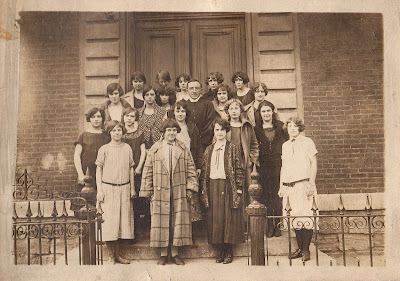 Joseph S. Wonderly was born August 26th, 1895 in Huntington, Indiana to John and Kate Wonderly.
Joseph suffered many losses as a child. His mother died in 1902 after giving birth to Joseph's youngest brother, Robert. His older brother, John, died of tuberculosis in 1914 and his father, a respected locomotive engineer, died in 1919.
Joseph went on to attend St. Mary's Parochial School, St. Joseph's College, and Mt. St. Mary's Seminary of the West. He became ordained to the priesthood by Bishop Aldering at Fort Wayne, Indiana on June 10th, 1922. He took a foreign language course at Maryland University and intended to do missionary work in China, though I have found no record of him ever doing so.

I believe this photograph was taken during Father Wonderly's time in Peru, Indiana, between about 1923 to 1928, when he taught at the St. Charles Borromeo School. The school was founded in 1922 by the Sisters of Providence from St. Mary-of-the-Woods, Indiana.

Father Wonderly then set out for Texas around 1929. In Pampa, Texas, he was a pastor at the Holy Souls church and taught at the Holy Souls Parochial School. He lived in Pampa until 1940, when he returned to his home state of Indiana. Rev. Joseph Wonderly died in Indiana in 1976, age 81.

If you know who any of these folks may be, let us know in the comments!
Posted by Emily E at 6:00 AM