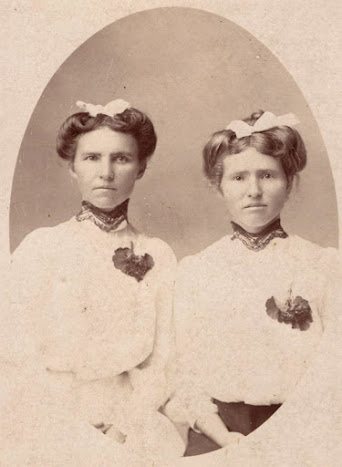 This is a photo of Linnie King Lawson and one of her sisters, probably Mahala King Walker. Since they're not labeled, it's hard to tell which sister is which. Any guesses?

Linnie Esther King was born in Mississippi in June 1882 to parents Allen and Rebecca King. She was one of 7 children, including her older sister, Mahala, younger brothers Thomas, Allen, Fernandes, and Andrew, and a little sister named Ursula. The family lived together on their family farm in Stephenville, Texas. Mahala, also sometimes called Ollie, was 4 years Linnie's senior. I believe that by the time this photo was taken sometime in the early 1900s, both sisters would already have been married.

Mahala married William U. Walker in June 1907. They lived in nearby Stephenville and had 7 children, one of whom was named Linnie after her sister.

Linnie's husband Winfield, who worked as a truck driver, was drafted into the military in 1918 at the start of WWI. His draft registration card describes him as "stout" with brown hair and brown eyes. Their son Doy worked in the oil fields as a young man, while David assisted his father in his trucking business.  Both sons went on to serve in WWII. After her husband passed away in 1937, Linnie lived with her daughter, Mayme, Mayme’s husband, Maynard, and their 3 children. Linnie Lawson passed away in 1949 at age 67.

Mahala’s husband, William, worked various jobs to support his family. In 1910, he is listed as an artist, specifically a landscape painter. Mahala meanwhile is working at a feed store. In 1920, William is a miller at a flour mill. In 1930, his occupation is listed as “laborer” in the crude oil industry. In 1940, at age 66, William is a farmer. He passed away at home in Stephenville in 1954. Mahala lived another 20 years before passing away in 1974 at age 97.

If you know who these ladies may be, let us know in the comments!