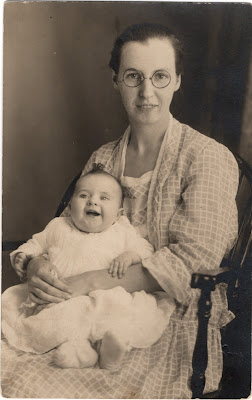 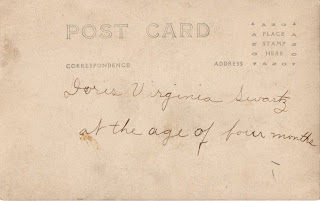 "Doris Virginia Swartz
at the age of four months"

This is a Real Photo Postcard of 4-month-old Doris Swartz and her lovely mother, Ila Mae.

Ila Mae Smith was born in New York on May 9th, 1902 to parents William and Dora Smith. At age 18 she married 34-year-old James Cleveland Swartz, Jr., in Cattaraugus, New York. He worked various jobs in his life, including as a molder in a foundry and as a carpenter. Doris was the first of their children together. She was born just a few days before her mother's birthday on May 6th, 1922 in Rochester, New York.

Just like her mother, Doris was married at age 18. She married 32-year-old Max Floyd Mann in 1941. Over the course of their 53-year marriage, Doris and Max had 7 children. Doris's obituary notes that at the time of her death, she had 30 grandchildren, 58 great-grandchildren, and 10 great-great grandchildren.