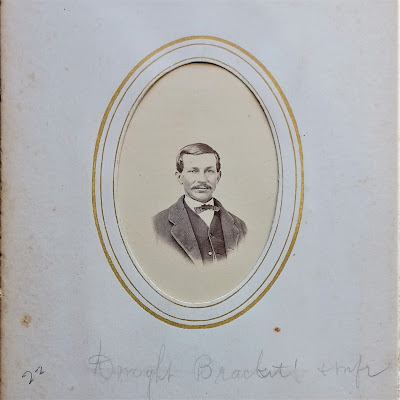 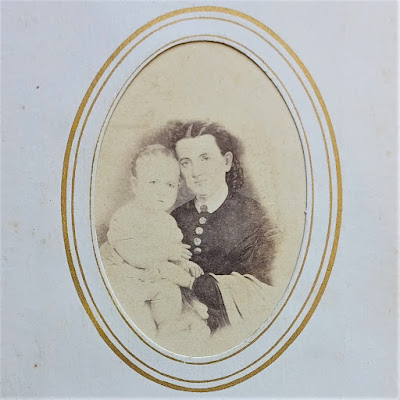 This double-sided photo is actually, I believe, a page from a carte-de-visite photo album that has been torn out. One side shows a woman with an infant, while the other shows a man. Below his photo, written in pencil, is "Dwight Brackitt + wife." There is not much information here and I figured out that the surname may not be "Brackitt" but rather the more common spelling of "Brackett." So who is this gentleman and his family?

The closest match I've found is a man named Irving Dwight Brackett, who was born on May 4th, 1839, in Bellevue, Michigan. He was just one of Martin and Mary Brackett's 10 children. The Bracketts were considered a distinguished, early settler family of Michigan. Martin Brackett, described in his obituary as "the man most prominent, all things considered, who lived and died in Bellevue," was an attorney, a county clerk, and ran for state senator and lieutenant governor (losing each time). Irving Dwight didn't quite follow in his father's footsteps, instead working as a clerk in a dry goods store until his marriage.

On May 14th, 1861, he married 16-year-old Mary Goss. Mary Aristeen Goss was born on a farm in Convis Township, Michigan, on May 11th, 1845. Her parents, William and Chloe Goss, were early Bellevue pioneers, just as the Bracketts were. Dwight and Mary settled at the Goss family farm, where Dwight took up farming. Along with his work in agriculture and livestock, Dwight would also go on to conduct a general merchandise business, serve two years as treasurer of Convis Township, one year as township clerk, and four years as justice of the peace, among other things. Like his father, he stayed active in his community.

The Bracketts had three children together: Rubie, Mary, and Clara. Tragically, none of their children lived past infancy. This tells us that the child we see in the photo with Mary (if this is the same Mary Brackett) likely did not live long after this photo was taken.

Irving Dwight Brackett died on December 15th, 1919, at the age of 80. Mary would live another 18 years until 1937 when she passed at the age of 92. At the time of her death, Mary was considered the oldest resident in Bellevue.

Do you think these are the right Bracketts? If you know who they may be, let us know in the comments!
Posted by Emily E at 1:32 PM